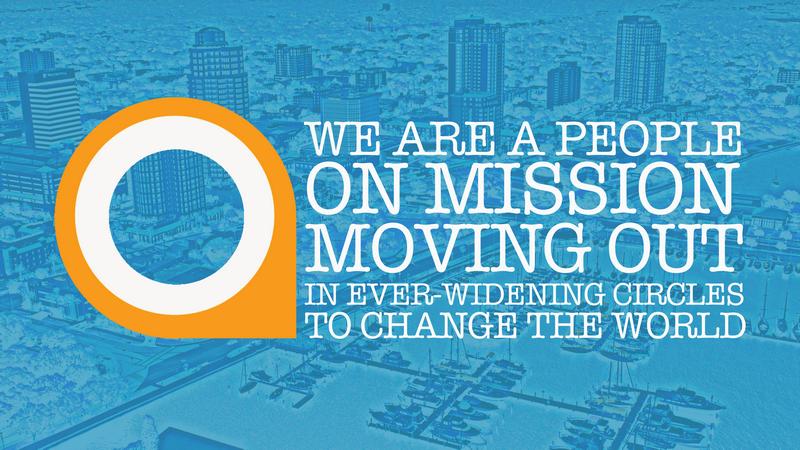 We are a people, on mission, moving out in ever-widening circles to change our world.

I say those words every week at the open of our 11AM gathering. It's the mission of Radius. It's our goal for every person that walks through the doors of the Shuffleboard Club each Sunday; we want you to join the mission of Radius Church and make an impact on the people in your world; your workplace, your social circles, and your family.

What I neglect to say most weeks, and what Blake usually fills in, is the vision that goes along with the mission statement. Looking at the mission on it's own, one could take it to mean many things. I mean, look at what's going on in the UK right now...there is a group of people moving out in ever-widening circles changing the world. In fact, there are many different groups of people trying to change the world in many different ways. Some of them are succeeding, others are causing panic and fear in cities all around the world.

So let's be clear.

The way we want you to accomplish the mission of Radius is by being a visible, tangible evidence of Jesus' love in St. Petersburg. This means we have to go beyond Sunday. We aren't talking about just loving one another during shake-up on Sunday morning when we walk around an greet one another. No. We want to go deeper in our relationships. We want to connect through Radius Homes across Pinellas County. We want to serve together; feeding and clothing people, caring for the sick, the young, and the elderly. We want to find ways to provide peoples' basic needs, and when the opportunity presents itself, we have put the time, love, and care into people's lives so that they will be open to listening to the good news. We don't just tell people about what Jesus did for them, we want to show them. When people experience the love of Christ, they will be much more open to listening than if we were to just stand on street corners yelling at people to repent and handing out tracts.

God’s message was preached in ever-widening circles, and the number of disciples increased vastly in Jerusalem; and many of the Jewish priests were converted too.

The early church that we read about in Acts was passionate about their mission. They were on fire for God. Sure, they weren't perfect, and they spent quite a bit of time arguing about who their mission applies to. Old traditions tried to creep into new beliefs, but by and large, the early church was unified in their desire to share the love of Christ with anyone and everyone.

Perhaps the same can be said about us today. We all come to Radius with different backgrounds and beliefs. We've all experienced religion in different ways, but we are all there together. For some reason, God has brought you to Radius. To me, that means he wants you to be part of the mission.

But there's something holding us back. We all also come to Radius with different struggles and addictions. We all have that whisper in our ear.

The enemy is constantly trying to convince us that...

The guy that freed the Jews from slavery was a murderer and had a speech impediment.

The greatest king in the history of the Jews struggled with lust (and also kind of had a guy killed in battle because of it).

The guy that God chose to build the church betrayed Jesus in his greatest time of need.

The guy that wrote most of the New Testament murdered Christians like it was his job.

Time after time, we see God use people who aren't good enough, who aren't worthy, and who are the most unlikely of heroes. At some point in those peoples' lives they made a decision to obey God's call on their life. They dealt with the issues they had and they stepped into the life, and the work, that God prepared for them to do. They weren't always ready, but they were willing. We, as the body of Christ, need to recognize that we have within us the same power that brought Jesus back from the dead. It's time to put our past in our past and focus on how we can grow in our faith and our relationship with God today and tomorrow.

The difference between unlikely heroes and you and me is that those people made the decision to obey God, and then took action. How many times have you made the decision to follow God, but found yourself right back in the same spot you were before? How many times have you decided to stop doing the thing that you know is hurting you and those around you, only to end up back in that dark place?

Take action. Do the hard thing. It's worth the short term pain for the long term victory.

I'm right there with, trying to figure it all out as we move through this life. This is why we gather together on Sunday and throughout the week in Radius Homes; in order to lift each other up, and to remind each other that it's worth it. We are stronger together. This is why we reach out and serve throughout St. Petersburg; when we show love, then God can work through us. We are called to the mess.

Let's be an unlikely group of heroes in St. Petersburg. Let's make the decision to unify under one mission and take action.

Take a look at our Core Values. I believe that will give you a view into the heart of Radius.

Gather with us as we begin a new series on David this Sunday. In the mean time, check out some of Blake's previous messages on our YouTube channel here.