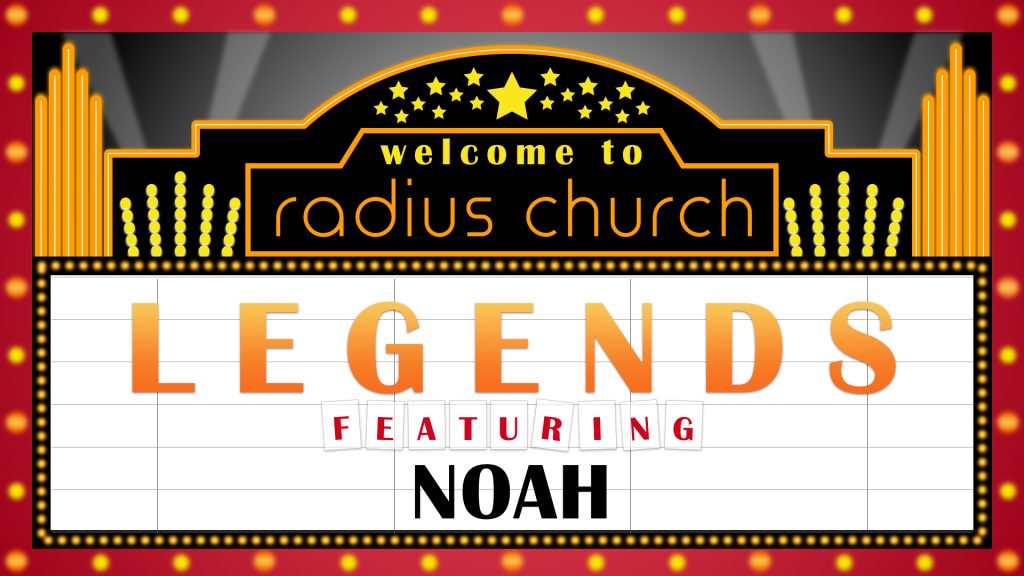 This week our guest author, Cassie, shares her honest and transparent thoughts on our Legends series as she takes us into the story of Noah.

I glanced in my rear view mirror at the fuzzy blonde head in the backseat. At less than two years old, he was too little to understand that the world and family he knew had been forever changed. Sin had entered the picture and did the only thing that sin does; destroy. Although this little one didn’t belong to me, his mother is like a sister to me, and I loved and cared for him and his family deeply.

As I rounded the corner to this little boy’s broken house, I looked up and saw a beautiful rainbow in the sky. Where moments before questions, frustrations, and anger had swirled in my mind, in an instant one word cut through them all: promise.

His promises are always true.

His promises do not return void.

I can’t imagine what Noah and his family must have been feeling. 40 days of rain and flooding? They had to start wondering if it was ever going to end. They had to doubt whether God really knew what He was doing, and if they would ever see dry land and sunshine again. Their temporary circumstances had to start feeling like they were going to be pretty permanent. The same is true for us when the storms of life come and grief, sorrow, and pain seem as though they will be our constant companions. Will this ever end? Where is God? How could anything good ever come out of this?

In any given situation in life, we all have choices. We choose how we react and how our circumstances grow and shape us. It’s human nature when things happen to us, to lose focus of the fact that we can allow those same things to do something through us.

So, what does that look like, practically? Well, if we take a page from Noah’s story, I think it looks a little like three not-so-simple steps.

People surely thought Noah was crazy. Noah himself may have even questioned his sanity at times as he built a massive ark following God’s incredibly specific instructions. The Bible says Noah was a righteous man who found favor with the Lord. Because Noah walked with God, because he invested in his relationship with his heavenly father, he talked to Him regularly. We all know that with any relationship, you only get out what you put in. God was no stranger to him, so when He spoke, Noah recognized His voice. Then he did what seems like the most obvious next step; he obeyed. And yet, how often do we miss out on this?

We have a dream God planted in our hearts. We feel God leading us in a certain direction in our lives. We feel prompted to speak to someone. We feel God putting His finger on a sin habit in our life that we know needs to be dealt with….

But we let fear, uncertainty, self –doubt, or pride get in the way of our obedience. I write this to myself as much as to anyone who may read it. I am currently going through the most difficult time of my life. There are days where I don’t know up from down, and holding onto God’s promises and walking in obedience to Him in the midst of intense heartache is difficult and at times seemingly impossible. But in a time of uncertainty, what I do know is this…I want it to be said of me that I found favor with God. I want to be seen as righteous in His eyes. I want to raise my son in such a way that the same will be said of him. The Bible says if we draw near to Him, He will draw near to us. Draw near and listen for His voice. He will speak. When he does, listen and obey.

After the waters receded, and Noah and his family safely stepped off of the ark, the first thing Noah did was worship God. He built an altar and offered burnt sacrifices, and the Bible says it was a sweet and pleasing aroma to the Lord.

The truth is, storms are a part of life, and in most cases, all of us are either in one, coming out of one, or one is looming ahead on the horizon. No matter where you find yourself today, build an altar. Worship the One who sets His sign in the sky as a reminder of His covenant to us.

When nothing else in life is good, He is.

He is worthy of our worship.

Gather with us this Sunday as we continue our Legends series. In the mean time, check out Blake’s message on Noah from this past Sunday here.