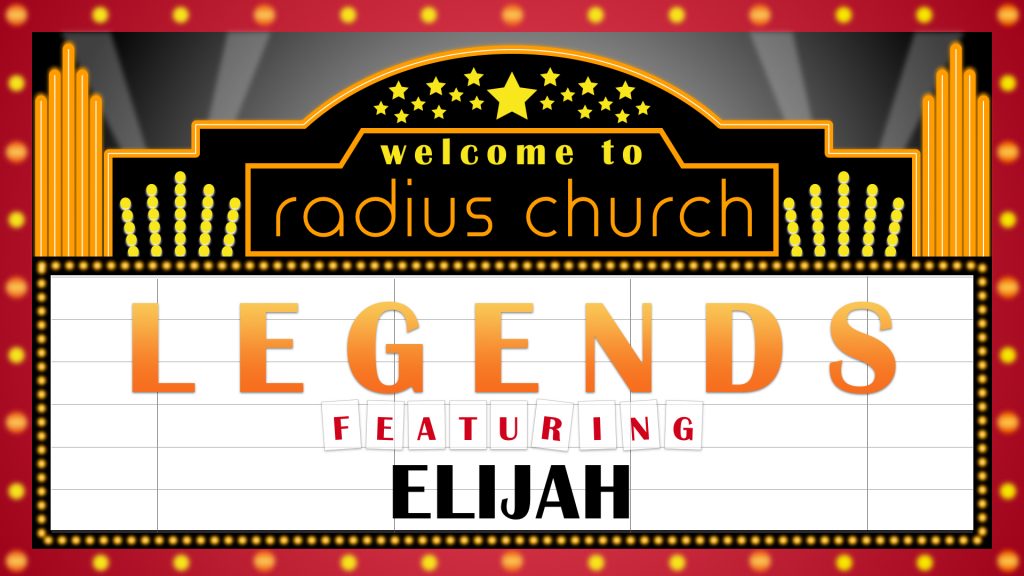 If there is one story from the Old Testament that I wish I could make into a big budget epic film, it would be the story of Elijah. This guy - this crazy guy - absolutely sticks it to those who had turned their backs on God. There is no question about it, The Showdown on Mount Carmel would make for a hot summer blockbuster (or a really good dessert). It's got everything; great characters, solid plot, amazing special effects, and a lesson we can all learn from.

Elijah was a man of God. He spoke to the Lord and delivered messages to the people. He was really good at it too. When God said 'jump,' Elijah didn't need to ask 'how high?' - he just did it.

So when God told Elijah (the casting is difficult on this one, maybe Christopher Lee, Harrison Ford, or Viggo Mortensen) to let the king know there was going to be a drought, Elijah marched up to the king and told him what was coming. When the drought Elijah predicted came to fruition, Ahab (the king, perhaps played by Ben Kingsley) and Jezebel (the lunatic queen who wouldn't hesitate to kill anyone she felt wronged her, played by Halle Berry) were pretty ticked off and they wanted to kill Elijah. Elijah knew this, but was still obedient when God told him to tell Ahab that the drought would be coming to an end soon (after 3 years). Elijah was a bit ticked off too. He'd been warning Israel that they needed to turn away from false gods and back towards the one true God, Jehovah. So he challenged the king.

So Obadiah went to tell Ahab that Elijah had come, and Ahab went out to meet Elijah. When Ahab saw him, he exclaimed, “So, is it really you, you troublemaker of Israel?”

“I have made no trouble for Israel,” Elijah replied. “You and your family are the troublemakers, for you have refused to obey the commands of the Lord and have worshiped the images of Baal instead. Now summon all Israel to join me at Mount Carmel, along with the 450 prophets of Baal and the 400 prophets of Asherah who are supported by Jezebel.”

So Ahab summoned all the people of Israel and the prophets to Mount Carmel. Then Elijah stood in front of them and said, “How much longer will you waver, hobbling between two opinions? If the Lord is God, follow him! But if Baal is God, then follow him!” But the people were completely silent.

Now there were 450 prophets (standard dim-witted extras) who follow Baal (no casting necessary). Elijah has them set up an alter, sacrifice a bull, and call out to Baal.

About noontime Elijah began mocking them. “You’ll have to shout louder,” he scoffed, “for surely he is a god! Perhaps he is daydreaming, or is relieving himself. Or maybe he is away on a trip, or is asleep and needs to be wakened!”

So they shouted louder, and following their normal custom, they cut themselves with knives and swords until the blood gushed out. They raved all afternoon until the time of the evening sacrifice, but still there was no sound, no reply, no response.

Queue the rave scene (re: The Matrix - loud techno music, dancing, and debauchery).

Now it's Elijah's turn (close-up on his face as he looks towards the sky, a confident smirk forms on his mouth).

Then Elijah called to the people, “Come over here!” They all crowded around him as he repaired the altar of the Lord that had been torn down. He took twelve stones, one to represent each of the tribes of Israel, and he used the stones to rebuild the altar in the name of the Lord. Then he dug a trench around the altar large enough to hold about three gallons. He piled wood on the altar, cut the bull into pieces, and laid the pieces on the wood.

Then he said, “Fill four large jars with water, and pour the water over the offering and the wood.”

After they had done this, he said, “Do the same thing again!” And when they were finished, he said, “Now do it a third time!” So they did as he said, and the water ran around the altar and even filled the trench.

At the usual time for offering the evening sacrifice, Elijah the prophet walked up to the altar and prayed, “O Lord, God of Abraham, Isaac, and Jacob, prove today that you are God in Israel and that I am your servant. Prove that I have done all this at your command. O Lord, answer me! Answer me so these people will know that you, O Lord, are God and that you have brought them back to yourself.”

Immediately the fire of the Lord flashed down from heaven and burned up the young bull, the wood, the stones, and the dust. It even licked up all the water in the trench! And when all the people saw it, they fell face down on the ground and cried out, “The Lord—he is God! Yes, the Lord is God!”

God showed up in a big way. It's easy to see this as just a story (or an epic movie) and say that it is either a work of fiction, or that it was  long time ago and things were different. It's true, things were different. God used prophets back then. Most people didn't have direct access to God. Now, because of what Jesus did on the cross for us, we have access to the same Holy Spirit that raised Jesus from the dead (Romans 8:11).

Relationship. We go out into our community and we build relationships with people. We love on them. We forgive them. We remind them it's OK to not be perfect. We love them like God loves us.

So let's be a Radius of grace in our community and watch God work.

Gather with us this Sunday as we continue our Legends series. In the mean time, check out Blake's message on Elijah from this past Sunday here.