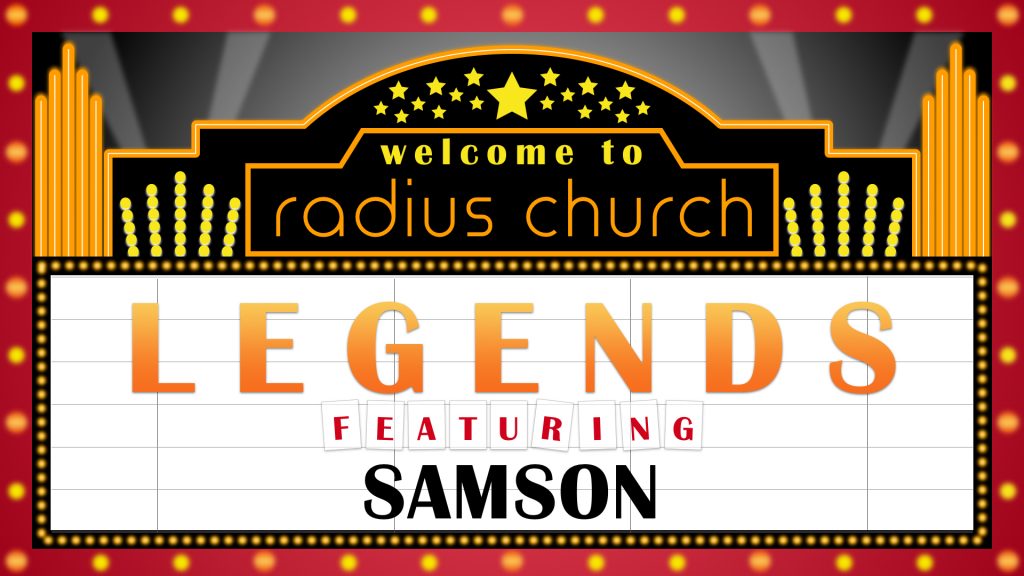 "Rob has such great potential. If he would just apply himself, he could do so much."

I've personalized this, but I think many of us saw something like this on a report card, progress report, or note home at some point in our lives.

For me, it was a problem with consistency. I was very consistent at being inconsistent. I would try for a little while and the get bored or lazy and my grades would suffer. I was smart enough to get average grades without trying very hard, but not motivated to give it much more effort than what was expected of me.

Fortunately for me, not a lot was expected of me. Unlike Samson, I was just a regular kid in a upper middle-class suburban family.

Samson, on the other hand was bound for greatness from before he was born.

An angel of the Lord told Samson's mom,

You will become pregnant and give birth to a son, and his hair must never be cut. For he will be dedicated to God as a Nazirite from birth. He will begin to rescue Israel from the Philistines.

That's a lot of weight to put on a kid, and his parents. How would you parent your child differently if you knew he was going to rescue Israel from the Philistines. That's like saying, "your kid is going to rescue the Jews from the Nazi's."

"If Samson would just apply himself, he could save Israel from the Philistines."

So when Samson started showing signs of greatness, his parents and everyone around him must have gotten really excited. When he grew bigger than the other kids his age, or when he started displaying unnatural strength, people must have really started to watch him closely to see what he would do. They all wanted to follow his Snapchat story.

But like a lot of great men, Samson had a weakness. All the attention and the expectations of him reaching his full potential; all the likes on his Instagram posts must have made him feel pretty important. While he understood his potential, he let temptation get the best of him.

Keep watch and pray, so that you will not give in to temptation. For the spirit is willing, but the body is weak!

The truth is we all have great potential. Any one of us could rise up an do something as monumental as saving Israel from the Philistines. We all have greatness living with in us.

...No eye has seen, no ear has heard, and no mind has imagined what God has prepared for those who love him.

So what's stopping us?

Probably the same things that held Samson back from being truly great.

Focus. Where do you put your focus? Samson set his focus on the things he wanted; women, power, and winning. These distractions kept him from doing what he was called to do.

When we set our focus on what is true, what is right, what is pleasing, and what is good, then our lens changes. We stop looking at the world through broken glass and see the reality of our situation. We stop looking in the mirror and seeing our flaws, our failures, and our fears and start seeing our beauty, our victories, and our potential.

When we recognize that the source of our power does not come from our own strength or will-power, but from the creator of the universe; the one who defeated sin, then we put ourselves on the path out of the valley of the shadow of death. We have access to a power and a hope that is greater than any on earth so that even when we are stuck in the chaos of the world we can find peace.

Samson claimed victory in the end.

Then Samson prayed to the Lord, “Sovereign Lord, remember me again. O God, please strengthen me just one more time. With one blow let me pay back the Philistines for the loss of my two eyes.” Then Samson put his hands on the two center pillars that held up the temple. Pushing against them with both hands, he prayed, “Let me die with the Philistines.” And the temple crashed down on the Philistine rulers and all the people. So he killed more people when he died than he had during his entire lifetime.

He recognized the source of his strength and cried out to the Lord. And God, being as amazing and as awesome as he is, remembered Samson and used him to save Israel from the Philistines.

Samson lived up to his potential. But did he have to go through the dark times to get there?

Can we learn from Samson's story? Can we cut out the hitting rock bottom part and begin to rise up as a community now? Does it take total defeat before we realize that our focus should be on the Lord and our source of strength comes from Him?

Or can we live in victory now?

I believe we can.

Gather with us (in victory) this Sunday as we continue our Legends series. In the mean time, check out Blake's message on Samson here.