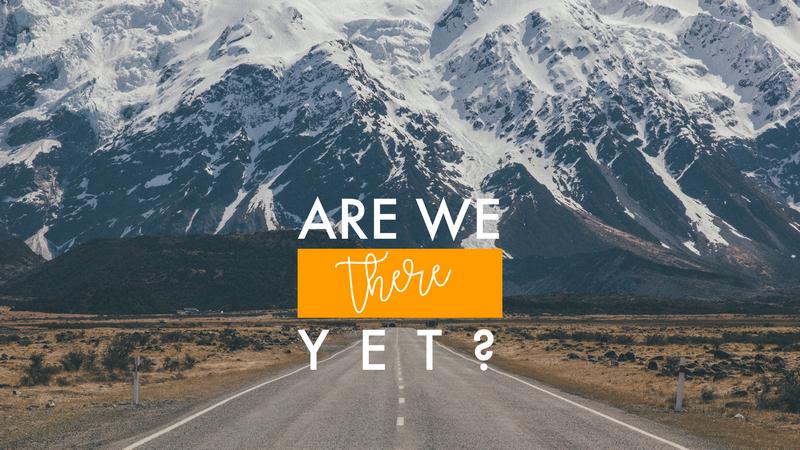 No matter how much preparation you put into a road trip, something is bound to go wrong.

Nothing seems to break the spirit of a road trip quite like unforeseen pitstops and detours caused by mechanical failures and unforeseen obstacles. What was once an excited family on an adventure across state boarders quickly turns into a cesspool of finger pointing and complaining.

"Why didn't you have the tires checked like I told you?"

"I just got this battery like a year ago!"

"Just turn around and go back the way we came!"

That last one was a joke. Everybody knows that you never go back the way you came. You just find a new way going forward.

When pharaoh told the Israelites to get the heck out of Egypt, they didn't have much time to plan. Their excitement and the command to leave put them on the road without much preparation. No one was pouring over a map or entering their destination into Google. Instead, they had to trust their leader; an old man who had just performed multiple miracles under the orders of the creator of the universe. They watched him bring plagues upon Egypt. They watched him lead a million people out of slavery. They watched him part the Red Sea by holding up his staff.

It was no secret that this guys was something special. He was the real deal. He knew what he was doing and where he was going.

But when a few days past and they hadn't found any fresh water, people started to wonder. And when food was hard to come by, they began to remember back to when they were enslaved and had food to eat.

There, too, the whole community of Israel complained about Moses and Aaron.

“If only the Lord had killed us back in Egypt,” they moaned. “There we sat around pots filled with meat and ate all the bread we wanted. But now you have brought us into this wilderness to starve us all to death.”

In fact, the more you read through Exodus, and the rest of the Old Testament, the more you'll see Israel complaining. They complained about everything. Nothing was ever good enough for them. God would save them from certain annihilation and they would follow him, then lose interest and start chasing after other gods and idols. Then things would go bad and they would call out to God and he would save them. The whole cycle would start again.

I mean, can you believe that? Who would do that?

Think about it. You make a plan and start trying to implement it; that one plan that's going to make life easier, improve your financial situation, help to kick that habit. You know, that plan. Usually it's happens somewhere around the beginning of the year. You draw a line in the sand and say, "enough is enough."

But things don't go the way you mapped them out. You get a flat tire. There's bad traffic on the road to success. You try to stay positive, but your friends at work are already complaining about how their plans aren't working out either. The more you talk to them, the harder it gets to stay focused on your goals. The more they complain, the more you complain. The more they lose hope, the more you wonder if anything is ever going to go your way.

You tried praying, right? You spent 5 minutes that one time praying about it and nothing changed so that must not be the answer. Or maybe you tried giving it to God and you even heard him speak to you and tell you what step to take, but you didn't want too take that step. That step is too hard. That step is too uncomfortable. If you took that step, then what would people think of you? There must be another way. You'll just find another way.

Eventually, you give up. It's just not worth it. There must be something wrong with you. Or maybe God just doesn't want you to reach your goal.

Not that I was ever in need, for I have learned how to be content with whatever I have. I know how to live on almost nothing or with everything. I have learned the secret of living in every situation, whether it is with a full stomach or empty, with plenty or little. For I can do everything through Christ, who gives me strength.

God doesn't want us to fail. But sometimes, we need a reminder of who is in control. When we realize that we are out of control, then it is time to focus on the one who is in control. And every day, we should remind ourselves of that fact. God is in control and if we do what he calls us to do, then we will have what God needs us to have. When we are obedient to God, then there is no need to complain. But if you must complain, just remember that it is by your choice that you are complaining and not by your circumstances.

Following God is not an easy journey, and it's not one without pitstops and detours, but it is the greatest road trip we will ever embark on in our lives. Unlike most road trips, this one gets better with time.

Gather with us this Sunday as we continue our 'Are We There Yet?' series. In the mean time, check out Blake's message on complaining here.